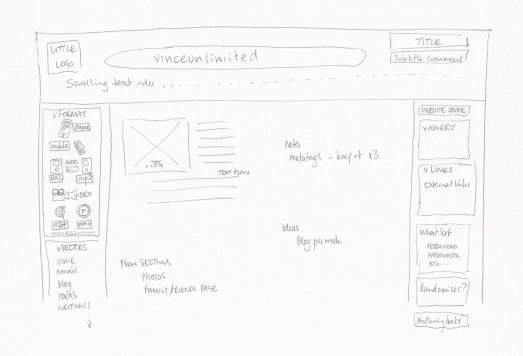 Dan, dan, delah! Der, der, der, derrh! Tah Da! And however you might spell a drumroll. vinceunlimited.co.uk has roared into stage 5!

And it’s a return to the original vinceunlimited concept idea. I have gone back to basics and have elected, once more, to learn how to and then do all the web-coding myself. And appropriately, the latest standard for web coding is HTML 5. So I’ve had to learn a whole bunch of updated rules.

Plus to do this properly I also had to learn the associated coding for CSS and Javascript. If you are unsure what all this means basically the HTML bit handles the layout and words, the CSS stuff seperates out the colours and styles and the Javascript jibberish allows complex page selection such as the Random Page Selector button actions on each page.

My original vinceunlimited site, forseeingly known as version 1, was catipulted onto the main stage in October 2003. It was hand coded in a contemporaneous version of HTML.

Version 2, appeared on the internet in May 2005 with coding that took my site to the next level with a better layout, a sidebar and dual colours.

I always struggled with getting HTML coding to set and wrap around images and with image links and couldn’t find the time and way to code version three which was planned to look like the image but I was saved all this effort by the introduction of Apple’s colouful WYSIWYG iWeb App so this became the basis for actual version 3, in March 2010.

Are you paying attention to these dates? A quiz will follow.

But Apple had other ideas about keeping the iWeb pet project alive and I had to find another way to maintain my web presence.

In 2012, July to be a bit more precise, with the development of FaceBook and Twitter, personal web-sites seemed to be going out of fashion. The era of the common blog had really started. And this bandwagon was truly seized upon when I clambered aboard this WordPress site, effectively making this the fourth version of vinceunlimited.co.uk

But WordPress is mostly about piggy-backing on other people’s hard worked designs and trying to disguise this plagiarism with a bit of personal customisation. I always found this awkward and unsatisfactory so decided to go back to first principles and code the thing again myself, hence version 5.

Have I bucked the trend? Am I just showing off? Or am I just avoiding the sheeple? These questions and less will be answered in the next few years.

Author: Vince Poynter
This is a copy of the first page added to the re-launched hand coded vinceunlimited.co.uk web site Version 5.0001 dated 30 Sep 2017.  You will have to visit the web page to enjoy the full experience
The image depicts the original design for vinceunlimited version 3, now the basis of Version 5.